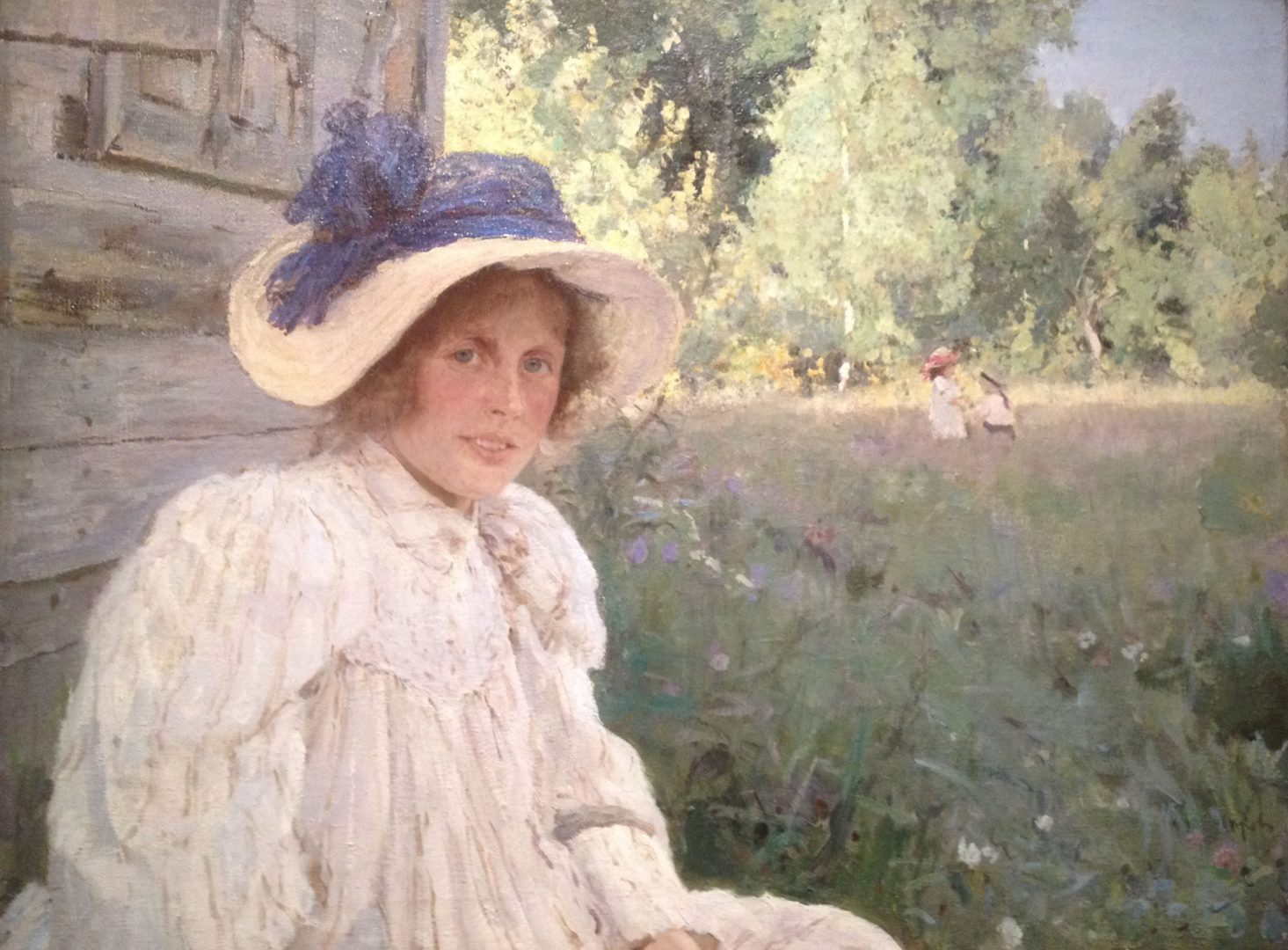 The Age of Tolstoy and Tchaikovsky – and (Great!) some women too …

To the press launch today of this thrilling small show at the National Portrait Gallery, London. It was genuinely exciting to be in the same room as heroes like Dostoevsky, Chekhov and Mussorgsky, hung nice and low so you can look them straight in the eye – wonderful portraits of these three and of 25 more, all on loan from the Tretyakov Gallery in Moscow (that cultural exchange is an event in itself).

Dostovesky, the only portrait of him done from life, in 1872 when he was celebrated. But in 1849, when he was 28, he was sentenced to death for involvement in an underground group. A last minute reprieve made it ten years of penal servitude. You can feel anxiety and tension in the portrait – the raised shoulders, the entwined hands, the space above him bearing down.

Chekhov, his intelligent eyes gazing directly into ours. This was painted in 1898 when he had his first theatrical success – in Nice, with TB.

Mussorgsky – an alcoholic, he was painted in hospital just before he died. The painter gave his fee to his memorial, not wanting to profit from it.

Marvels all three – but an added pleasure, and to be frank, surprise, was to see quite a few women on the walls. At first I thought it was only actresses and wives – they were represented, but there was also a world-famous pianist and composer I’m ashamed to say I had never heard of, two patrons, a singer and a poet. Is it possible that Russia between 1860 and 1914 just didn’t produce many great women writers, though Britain had so many?

In the first room the two women on show are actresses, somewhat overpowered by the big three novelists (Dostoevsky, Tolstoy and Turgenev), the critics and impresarios. But still, actress Maria Ermolova was pretty powerful herself – painted from a low angle to give her the status she clearly deserved. Apparently she had a planet, a crater and a theatre named after her. She exudes self worth.
Hanging next to Maria was a rather frightened-looking, little woman in a much smaller frame – Pelegeia Strepetova. The notes beside it say the portrait shows the poise and focus she brought to her roles but to me she seemed cowering. Which could never be said of Baronness Varvara Iksul von Hildebrandt, resplendent in red, towering above you. She ran a famed salon in St Petersburg and had to flee come the revolution.

The Baronness, patron of the arts. The revolution killed Nikolai Gumilev, poet, critic and the ex-husband of poet Anna Akhmatova – she herself was relentlessly persecuted in Bolshevik and Stalinist times.

Anna Akmatova’s ex husband, executed 1921 for allegedly counter-revolutionary activity, with her portrait behind – she was devastated by his death.

Far less well known now is Sophie Menter, pianist and composer, indeed Professor of Piano at the St Petersburg Conservatoire, painted in a Manet-like pose and style in 1883 … forgotten by history – til now!

I went up to congratulate the curator, Rosalind Blakesley, for putting these women on the map. She said that in her first power point presentation there were hardly any women. So they broadened the brief to include patrons, like the Baronness, and stretched it to a later date and style, to include the more modern portraits of Akhmatova and he ex-husband.

Only one woman is there just as a wife – Olga Serov painted by Valentin Serov – ‘In the Summer’. ‘It’s just a beautiful and unusual plein air portrait.’

Singer and actress Nadezhda Zabela-Vrubel, another wife painted by her husband. Nadezhda was a talented soprano and actress in her own right.

Rosalind Blakesley said the Russians were surprised that they wanted to borrow so many women, not considering them important – pianist Sophier Menter for example. “But apart from being a very significant figure, not known much in the West nowadays, it is also a lovely portrait, with a touch of Manet to it.’

With a different curator, with no feminist consciousness, the women could all too easily have been left out, hidden again from history.